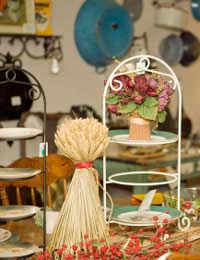 Mother-of-three Angela Wilson has shopped in charity shops for as long as she can remember – and it’s not just because she saves money.

Angela, 39, who lives in Sunderland, is a single mum and currently living on benefit.

This means she has to provide for her three children – a teenage son and daughters aged nine and seven – from a very limited budget.

“I visit a whole range of charity shops on a weekly basis,” she says, “But I used to buy from charity shops even when money wasn’t so tight.

“I’ve never had any hang-ups about buying ‘used’ goods and if more people thought about the environmental benefits of charity shopping, we’d produce much less waste as a result – and save energy.”

Good for the Environment

Producing anything new – whether it’s a computer or a winter coat – uses valuable resources and consumes energy. Often, the purchase can be made in a charity shop – or second-hand shop – avoiding the energy and resources used for a new product and recycling an item that would otherwise be regarded as waste.

“Of course, you can’t buy everything from charity shops,” she said. “There are some things that are a definite no-no!

“I would never dream of buying underwear or tights for the children, for example and I’d never think of donating any to a charity shop.”

But Angela does regularly buy many things from charity shops and finds it much more fun that regular shopping.

“I get a real kick out of finding ‘treasures’ and snapping them up for a fraction of the ‘new’ price.

“For example, just recently I found a wonderful old wooden bookcase in a Cat Concern shop. It cost £3 and I love it. It’s got character that some awful mass-produced MDF bookcase from a high street store just wouldn’t have.”

Other purchases have included:

“Even if I had more money to spend, I wouldn’t give up charity shop buying,” said Angela. “I really enjoy it - and I like to know that I’m recycling goods.”

She is disappointed that most charity shops no longer sell electrical goods which means huge quantities are resigned to the scrap heap. “They say it’s for safety reasons but I know of one charity that pays to have them tested so they can still sell them.”

“I also hate the way that some charity shops throw away a huge amount of donated goods. I don’t understand why they can’t just slash the price instead of binning an item.

“It doesn’t make sense. There are people who couldn’t spend £3.99 on a pair of shoes but would snap them up when they were reduced to 99p!”

Angela’s tips for getting the most from charity shopping:

Don’t visit just one shop and be put off if it’s dirty and the goods are over-priced. Charity shops vary hugely – even between different branches of the same charityVisit on different days. You can miss out if you go in on Thursdays and they regularly put out new products on MondaysTalk to staff and tell them if you are looking for a particular item. Often, it’s there but you just haven’t found it!Examine goods carefully before you buy – or offer a lower price if something is missing or the item has slight damage

“Once you start visiting a charity shop regularly, you’ll find out its best-buys,” said Angela.

“There is a shop near us that receives overstocks of shoes from a major high street chain and the shoes are brand new and unworn. Another seems to get regular deliveries of book overstocks. Again, they are brand new books – identical to the copy you’d buy at a bookshop.”