Home > In the Home > Kitchen Appliances 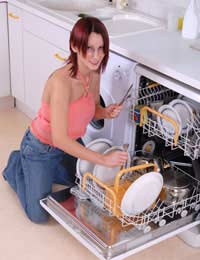 When it comes to buying a new appliance for the kitchen, it can be false economy to choose the cheapest. As well as the purchase price, the running cost of the product has to be taken into consideration, because a small monthly saving from a more energy-efficient appliance can add up to a substantial saving over its lifetime. There is also the environmental impact to consider. Choosing the right appliance and using it more efficiently can help reduce the effects of climate change and save water.

The good news is that modern washing machines and dishwashers are far more energy efficient than those manufactured in the early 1970s, although water consumption can still vary greatly depending on the appliance and the settings. Fridge freezers are much better too. Even though fridges and freezers are on 24 hours a day and work harder than any other kitchen appliances, modern ones use only a third of the energy to do the same job as 10-year-old models. Another benefit is that newer models do not contain chlorofluorocarbons (CFCs) that damage the ozone layer.

As Easy as ABC

Nowadays it is easy to know which appliances are the most efficient, as all white goods and ovens in Britain must carry the European Union energy label. It grades products from A (or up to A++ for freezers and fridges) for the best to G for the worst. Another label to look out for is the Energy Saving Recommended logo. It can only be used on the most energy efficient products - usually the top 20 per cent of those available.

It is also worth checking how water-efficient the product is, although, in general, the more energy efficient machines use less water. European Union energy labels show how much water washing machines need, and the best ones use less than 50 litres per wash. For dishwashers, it should be easy to find one that uses less than 15 litres per wash.

Turn Down the Heat

More energy savings can be made simply by using washing machines and dishwashers more efficiently. Washing clothes at 30 degrees saves energy and the latest detergents wash just as well at low temperatures. Also, it is better to run washing machines and dishwashers less often with full loads, as half-load settings use the same amount of water as a full load and more than half the energy.

Filters should be cleaned regularly to keep appliances running efficiently, and it is crucial to ensure appliances are properly plumbed in, as, if not, waste water that has not been properly treated can pollute storm drains and rivers, harming wildlife. When not in use, appliances should be switched off and unpluged to save the energy used by lights and displays.

A mistake many people make is buying an appliance much bigger than they require. Two different sized fridges may have the same efficiency rating, but the smaller one will cost less to run and use less energy. Also, it is important to defrost appliances regularly as this helps freezers and fridges run more efficiently.

Other Ways to Dry Out

There are certain appliances some people may be able to do without altogether, such as a tumble dryer. By drying clothes outside or on clothes racks instead of in a tumble dryer saves money and energy. Those with tumble dryers should fill it each time rather than running small loads more often.

Redundant appliances should be disposed of safely, as old machines that are dumped can leak harmful chemicals, causing pollution. Plenty of the big stores take away old appliances when they install a new one, and local authorities are obliged to collect unwanted white goods from householders.