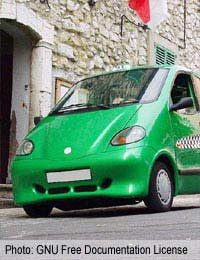 As prices begin to fall, more and more motorists in the UK are being tempted to buy an electric or hybrid car.

After all, an electric car must be more environmentally friendly than a smelly petrol car, mustn’t it?

Unfortunately, increasing numbers of people are beginning to question both the rush to develop electric cars and proposed government incentives to persuade us to switch from a traditional engine.

Critics see two main problems with the drive to persuade motorists to buy an electric or hybrid car.First and foremost, they claim that an electric car can actually be less eco-friendly than the traditional petrol engine.

This, they say, is because an electric car can only be as “green” as the electricity that is used to power it and currently, a fair amount of the electricity we use in Britain still comes from coal.

And experts says that if your vehicle’s electricity comes from a coal-fired power station, it actually emits almost twice the C02 that you would expect from a car powered by diesel.

Transport Watch, an independent organisation which produces data on transport, has produced a report in which it questions the value of electric cars at the moment.

And it says its figures don’t even take into account the average weight of an electric car (which are often much heavier than a conventional vehicle because of the weight of storage batteries) or the carbon emissions from these batteries and scrappage and recycling.

Transport Watch believes that while much of our electricity does not come from renewable sources, converting millions of motorists to an electric car could be an environmental disaster.

It has questioned the government’s decision to invest £250 million in further development of the electric car in the absence of any reliable data which proves they would be more eco-friendly than our current vehicles.

It wants a hold put on further electric cars until coal-fired electricity has been phased out or until plans for carbon capture become a reality.

Figures released by Transport Watch suggest that in urban conditions, an electric car uses 1.58 times as much primary energy as a diesel car and emits 1.28 times more carbon.

Environmental charity, Friends of the Earth has also questioned the hype about electric cars in view of the very low proportion of green electricity that we currently produce in the UK.

So where does this leave the average motorist who wants to help the planet?

At the moment it seems the jury is still out on whether it would be a good thing or a very bad thing to trade in your diesel car for an electric or hybrid vehicle.

The best advice at the moment is probably to simply reduce your car miles whenever possible by using other forms of transport such as bus, train, bike or even your own two legs.

You could also cut down emissions and fuel use by setting up a local car sharing pool – and in many areas that will even entitle you to use a faster lane on your route to work.

Shape of Cars to Come

In the future, however, there’s no doubt that electric cars could be the real way forward - once they can be powered by totally green electricity.

Recently, a concept car which in theory could have negative-carbon emissions was unveiled by a Chinese car company.

Although still firmly on the drawing board, automotive engineers say that by 2030 cars it is possible that cars could feature paint-on solar cells on their roofs.

This would allow them to generate their own power from the sun and there’s even a suggestion that wind power could be harnessed by a parked car to help with battery charging.