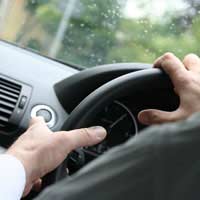 Transport accounts for 23 per cent of the UK's carbon dioxide emissions and is the fastest growing source of greenhouse gases. Road traffic, the third largest source greenhouse gases in Britain, is by far the biggest contributor to this figure.

A huge increase in private car ownership in the last 25 years has added to the problem of traffic pollution. In 1980, 41 per cent of households did not have access to a car, but that figure had fallen to 25 per cent by 2006 and at the same time the number of licensed vehicles rose from 19.2 million to 33.4 million. According to the Government's Department of Transport, there has been a 52 per cent increase in carbon dioxide emissions from transport since 1980, which is not surprising as road traffic has risen by 84 per cent and the annual distance travelled by cars has climbed 116 billion miles to 250 billion miles.

As well as carbon dioxide, vehicles are associated with methane and nitrous oxide emissions, and are the main source of many local emissions, including benzene, 1,3-butadiene, carbon monoxide, nitrogen oxides and particulates. There is research that links vehicle pollutants to ill health, with claims that air pollution causes the premature death of up to 24,000 each year in the UK.

Governments have reacted and tighter European standards on vehicle emissions have speeded up the introduction of cleaner fuels and greener vehicle technologies. Advances have been so great that a modern car produces only five per cent of the regulated pollutants that were produced by a car in 1970. In the future, cars will have to meet even more stringent regulations and manufacturers are aware of this.

The vast majority of cars still run on petrol or diesel, and cars with better fuel economy will be greener and cheaper to run. Savings can be made regardless of the size and power of the car, as miles per gallon can vary by 30 per cent within all performance classes.

However, future emission standards may be the catalyst for the growth of the hybrid-electric car, which is part conventional car and part battery-electric. Although more expensive to purchase at present, hybrids use up to 30 per cent less fuel than conventional cars, so the cost can be recouped. Most hybrids are exempt from London's congestion charge and produce significantly less harmful emissions.

Getting the Right Blend

Biodiesel is an option for owners of diesel cars, as many diesel engines can run on low percentage biodiesel blends without any modification. The benefits for the environment are largely dependent how much biodiesel is in the blend and, as this is typically around five per cent in low percentage blends, emissions are not dramatically reduced. Also, despite Government tax incentives, running costs are no cheaper as biodiesel has high production costs and cannot match the miles per gallon of conventional diesel.

An electric car can be one of the greenest forms of transport, with zero emissions possible if renewable electricity is used to charge the on-board battery that powers it. Even using standard UK mains electricity will cut greenhouse gas emissions by 40 per cent compared to petrol. There are other advantages too, as electric cars are exempt from road tax and London's congestion charge, and the annual fuel cost is around £1,000 less for average mileage.

The disadvantages are considerable too, however. Electric cars can cost up to 80 per cent more to purchase and rechargeable batteries, which last between three and five years, are so expensive they are usually leased at a cost of about £800 per year. Charging batteries from the mains takes between six and eight hours and fast-charge points are very few and far between.